Today's Cacher. The first ezine (and now paper mag) for geocachers. The editor emailed me a few months before because he needed a wierdo to feature on the cover of their Halloween issue. I was honoured to be that weirdo! It explained how the whole running around in the woods at night looking for tupperware dressed as Batman thing came about. You can read the article here.

Footnote. It's actually safer running around at night dressed like this. Nobody messes with you (except law enforcement).
Posted by Zartimus at 10:18 PM 1 comment:

Sometime in 2003 I was looking at a picture of myself from 2002 and realized that I had gotten freakin' fat. So I embarked on this thing we'll call 'Project Ketosis'. From what I had read, if you suddenly deprive your body of carbohydrates, after 2 or 3 days you go into a state of Ketosis where you have no sugar in your system and your body is forced to burn fat and preserve whatever glucose you have to run your brain 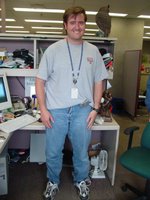 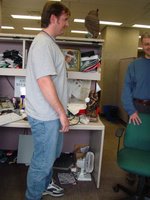 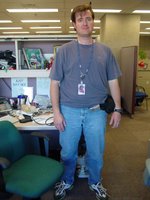 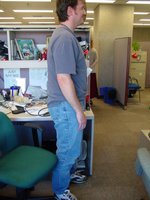 So a month after I started, I did the two week protein thing again, and went from 230 to 214, gained about 3 back water, so I weighed 217 at this point. I had cleverly (i thought) scheduled this two week stint to accomodate several birthdays in the family so I did not miss out on any cake action. Not that it matters. When you're in the Ketosis zone, people eating carbs in front of you is pretty easy to take. I will say this though.. Carbohydrates make you happy. You can get a tad grumpy on this kick. Thank god it only lasts two weeks. 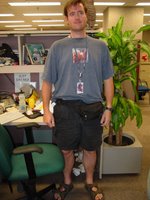 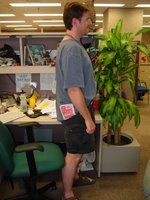 Went from 217 to 205 here. The whole process is starting to slow down, only a 13 pound drop over two weeks and the last 3 days I weighed the same, then went up 3 pounds water. I guess the less fat you have, the slower it starts to get. Still aways to go. This is a fun time because people you don't see every day assume you're dying of cancer when they bump into you. They don't tell you this, they usually ask a 3rd party in the know which produces gales of laughter (not that cancer is funny or anything). 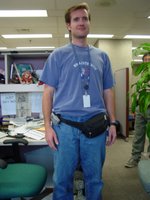 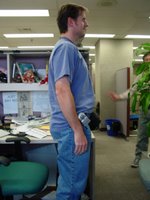 As for what I ate, uhh, Steak, shrimp, cheese, chicken, eggs, ham. For lunch I would bring these maple leaf packages of ham, 175 grams, like 2 grams of carbs. Diet pepsi. Diet creme soda, Coke zero, Crystal lite juice, bacon, packages of raw hotdogs (as long as they were low in carbs, some big hot dogs are like 2 grams of carbs apiece) diet jello, this diet whipped cream. Seasoning and stuff on meat helped with the flavour, everything starts to taste bland on this after awhile.

The big ticket item at the end of the day was the Atkins peanut butter cups. 2 grams net carbs per package of 3. They use sugar alcohol to lower the net carb value. Those would keep me going. I'd get a box of 15 and eat one at the end of each day as a reward.

One memory I have of this time was the day I was sitting down in our cafeteria at work. It was around Month 3 and I had dropped 35 pounds or so and was in between the two weeks stints and eating normal. I happened to have this ginormous caramel chocolate bar and was munching down on it when this lady I used to work with (who had not seen me in 6 months) stopped at my table and demanded I tell her what kinda diet I was on.. So I have this huge chocolate bar in my mouth, and I turn to her and say "Let me tell you, it's like this...."

She went away disappointed. She thought it was some all you can eat chocolate diet...