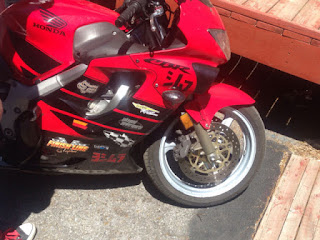 So this past week in Ottawa, there was this guy on a motorbike who would speed up behind you on the Queensway, tailgate you and if you did not immediately change lanes and get out of his way, he'd swing around and pass you on the driver's side and point a gun at you. He was driving a red Honda CBR and wearing a black helmet. He did this several times a day during his commute and numerous complaints were received. I saw it on Facebook, his picture was plastered everywhere and I caught it on the news.

Yesterday on Ottawa Kijiji, some guy is selling his Red Honda CBR (actually it was "For Sail") and it happens to have all the same kewl sticky stickers in the same placity places. There's even a shoe in the pic and look it's black and has orange laces? Different brand of shoe but hey, maybe the suspect likes black shoes and orange laces...

Can you say dumb-ass? He turned himself in today after Police tracked down the bike.
When you google his name you get a few tidbits.
in 2014 a man by the same name and age at the time of incident was charged with DUI, impaired operation of a motor vehicle by drug. Not sure what he was handed there, but months later he was stopped by police (they did not say what prompted the stop) and charged with possession of a weapon for a dangerous purpose, impersonating a peace officer and carrying a concealed weapon. Police seized an imitation hand gun, "blank" ammunition and a bullet proof vest.

I'll be very interested in seeing what happens to this dude if he is convicted of what they suspect him for. People like him just don't get it, if there's ever a Zombie Apocalypse, this is the type of "don't give a f*ck" guy who is more dangerous than the zombies.


If found guilty, please reserve a space in one of our nice jails for him.
Posted by Zartimus at 3:24 PM 1 comment:

Why does everyone screw up the "Let's Go Crazy" Riff by Prince...

So tonight I want to learn "Lets Go Crazy" by Prince, because I like that song, it's got cool parts, Prince died and that sucks. Maybe I'll get lucky and a fellow Youtubeopian has a guitar lesson and can save me some time. NOPE. I forgot, 90% of youtube guitar lessons SUCK and are wrong unless it's Justin Guitar or Marty whatsisname or the artist themselves, It's gonna suck because Guitar players who give lessons on youtube are lazy and base their lessons on what they recall from memory of the last time it played on their car radio when they were at the McDonald's drive thru, or the last time they were hanging out with Jeff their friend who has it as a ring-tone on their cell. Maybe they check the original recording for the key but it's quite obvious they stop after 5 seconds and start to invent shit after that.

That bugs the shit out of me. If you went to a performance of a Shakespeare play and the guy holds up a skull and goes "Atlas poor Robert Urick, I knowed him well" would you do a double-take? That is what this is like for me, almost disrespectful to the artist, I get offended for them.

Case in point. This guy seems fun, and from Manchester or somewhere like it. 30 seconds in: F# to E? E chord hammer on to A4? What version are you listening to man?

This helpful young man in the pony tail specializes in the Super bowl version from 2007. He is quite enamored about it and yacks for 5 minutes before teaching anything (Sounds like ME eh?). His unique version of the riff starts at 6:20. Special attention paid to wacking.


His interpretation of a cool one-handed move at 8:54 is too hard to play at E12. No one would ever play it like that. He's off by one string and 7 frets. Prince does it at the 17th position. You can tell this by counting the visible frets on Prince's Hofner at 1:51. When there's video of a performance that's this good, it pays to look at it.

I actually like this guy below and he is a great player (I totally learned Purple rain right there although I'm suspicious of "Never take the place of your man"  change up). Three of the other songs seem right but at 8:07, he too slightly murders the riff(well ,maybe manslaughter).

I shouldn't do this. It's not nice but it bugs me enough so that I stew about it and it comes out in bursts. People comment on these videos and thank the guys because they think they are right. Well, they successfully taught someone how to play it wrong. It's kind of like religion. 3 guys are teaching different interpretations of the same idea. Chances are two out of the three are wrong. In this case, it's three out of three. If they said it was their own take on it, or in the style of it, I'd be ok. This guy is good and he says that. He's still wrong though, it's not a semi-tone slide into the B. It's "inspired" though, so no foul. BONUS, He's stumbled upon the hammer on F# chord which I hear in the original. Good on ya! (pity about that semi-tone slide).

Sorry Prince.. I promise to shut up and do a "lets go Crazy" video lesson to make up for these ones because they bug the shit out of me. People should be able to learn to play your stuff the way you did, out of respect for the genius you were.

Until the next rant...