I saw my first digital 3D film in a movie theater the other day. The whole 3D experience impressed the hell out of me. I took the kids to see G-Force, a kid flick featuring mission impossible commando hamsters (they'd kick Tom Cruise's Scientology ass!). NOW I can understand all the hype and buzz. Some high up at Disney stated flat out a few years ago that from now on, all of their computer animated features were going to be in 3D. I can see why. James Cameron has finally surfaced from the bottom of the Atlantic (where he's been since 1997's The Titanic) and will unveil his Avatar 3D movie project soon (Ooooohh).

I have to add at this point that I went to see this film about Guini pigs a day after making fun of my Friend Mike for being dragged by his wife to see it the day before. He is, and I quote, "Doomed by marriage to see each and every movie featuring a cute animal, till the end of time." If you're like me, you remember the early days of anaglyph 3D films with the red/cyan insta-headache glasses from hell. When I was in the 6th grade Global TV did a big 3D comeback advertising blitz with old 3D movies from the 50's and 60's. The local newspaper's TV guide suddenly came with 2 pairs of 3D glasses each week and every Friday they'd run one of these horrible movies. I was at a sleep-over at my Friend Sufiyan's house the first time I saw a 3D film. He was from Pakistan, so picture his extended family and I, cloistered around a TV in the living room in the dark, all wearing these 3D glasses, with the extended commentary taking place in Punjabi (grin). Very surreal!

needless to say, it wasn't very good. I didn't see what all the fuss was about.

Now this new stuff! The cinema needs to have a Real 3D projector. It shoots out the film at 144 frames per second, 6 times the normal speed of 24 frames per second. It does 72 left eye and 72 right eye images with some other keyframe images every 1/24th of a second and a 2nd projector called a Z-screen sends out a feed that matches the polarity of the cool 3D glasses you're wearing in the theatre. This Z screen makes it so that your right eye is seeing a frame made for the right eye while your left eye is seeing almost nothing, then it repeats the process for the left eye, with the right eye getting no action. Your brain does the rest, using traditional persistence of vision to fit together the alternating left-right perspectives into something that makes stuff jump right out of the screen at you. Another nice thing is that you can actually move your head around to look at other parts of the screen and you don't lose the effect.

Screw with your neighbors using these garage prints!

These are great! They're big weather-resistant prints that fit over your garage door to make it look like you have everything from a Hawker harrier jump-jet to a huge alligator in your garage! There's even a clean garage print, which might be the scariest of all.

Posted by Zartimus at 1:01 AM No comments:

At work I sometimes go to break with a rag-tag group of current and ex co-workers and colleagues.

We appear to be an eclectic bunch and I've noticed that the topic of conversations are ridiculously varied and change faster than Michael Jackson's face (oops, sorry. There I go makin' fun of a dead guy). The thing that I find interesting is how one key word will swing the conversation in a direction it has no place going in. It's very odd. So I jotted some of the topics down on my IPOD and I'll mention some of the more interesting ones here.

- Someone's horse died on the weekend. It was a gelding. I asked what a gelding was (confusing it with a gelfling, an elf-like creature in the movie The Dark Crystal). I was told it was a horse with no balls.
"Why would you cut a horse's balls off?" I asked.
"To make it calmer.." I was told.
"Would that work with me?"
"Probably. let's try it.. " no thanks..

Someone chimed in.
"My dog is fixed, and he doesn't seem to care.." I thought about this.
"I wonder if having no testosterone producing balls would affect whether or not you'd look at good-looking ladies?" (like the ones just leaving the cafeteria at that moment).

"Maybe the dog doesn't care because it's realized it has no reason to live!" someone said. Chuckles all around..

"Chemical castration in sexual predators is said to work, as long as they keep taking it".
someone else added. Suddenly I remembered something..

"In Beverly Hills there is a vet who will fix your dog and sew fake balls into his scrotum afterward so he doesn't feel bad about himself!" I added.

"I wouldn't buy fake balls for my dog!"

"Why not!" I asked. "What kind of person doesn't want the best for his pet?"

Fake boobs were mentioned. I wouldn't buy those either. I told the story about how fake boobs sink and real ones float and how I found out by accident at work one day.

So we went from a dead horse to fake balls in your dog's nutsack. Typical..

Someone told a bad joke that made us all get up and leave..

"How do you know when your girlfriend is getting fat?"
"When she fits in your wife's clothes!"

Posted by Zartimus at 9:06 PM No comments: One thing I'm liking about the new house is our backyard neighbors. There are none (at least not the two legged mammalian variety). I make it a habit now to look out the back every time I'm near a window and I always manage to spot some new beast. Lately it's been a pile of deer that used to only show up in the morning and then at dusk, but lately they wander by at all hours. The picture at the left is an 11x zoom from my kitchen balcony. At the lower right is a regular view with Mr deer exploded out (so it's still pretty far when they stick to the middle of the field). I can't get very close to them because the birds rat me out the second I try to leave my backyard (must be some memorandum of understanding between the bird and deer union). This past winter we had a family of beavers right in back of us which were fun to watch. During any kind of thaw they'd come out and chop down a pile of trees and go back inside. One of my neighbors trashed their dam because he was afraid they'd drop a tree on his house and they just kinda left. I was a bit disappointed. I thought they'd be more tenacious than that and just cut down more trees to build the dam back up again (and maybe drop a tree on his house after all) but they left for greener pastures. I think they just relocated up the creek a few hundred meters. Now we have two muskrats living in the beaver dam. They are pretty shy and I haven't managed to take a picture of them yet. One weird backyard neighbor we have is a gopher that lives under our porch. Just to put the next photo in perspective, we have a ravine lot with walk in entrance to our basement. One day we found a gopher on our balcony with his nose up against the glass sliding door looking into the kitchen. He had climbed up to the 2nd story balcony for some reason. he hung around for awhile and then climbed back down. He's done it other times because we can see nose prints at the bottom of the glass. I think he's casing the joint. He's got a cousin that lives under this hunk of farmer junk out back. There's some sort of metal cylinder out there and this gopher hops up and sits there all day sunning. I guess he can see better from on top of this thing and likes it because no one can sneak up on him (like me). Then there's the wild turkeys. Up until a few years ago, I didn't believe these things existing in Ottawa. I'd been out in the bush a lot and had never seen any until a co-worker told me about them and I managed to spot some by the side of the road a few weeks later. The males appear to be quite huge. Still, I'm amazed the coyotes I hear at night haven't rounded them up and eaten them(they must be too fattened up on rabbits and bunnies to care).

I was in the back shutting off my pool the other night and I almost stepped on a raccoon that was nosing about my deck. He treed himself and gave me dirty looks until I left.

He's one of those new neighbors I still have to get pictures of!
Posted by Zartimus at 12:37 PM No comments: 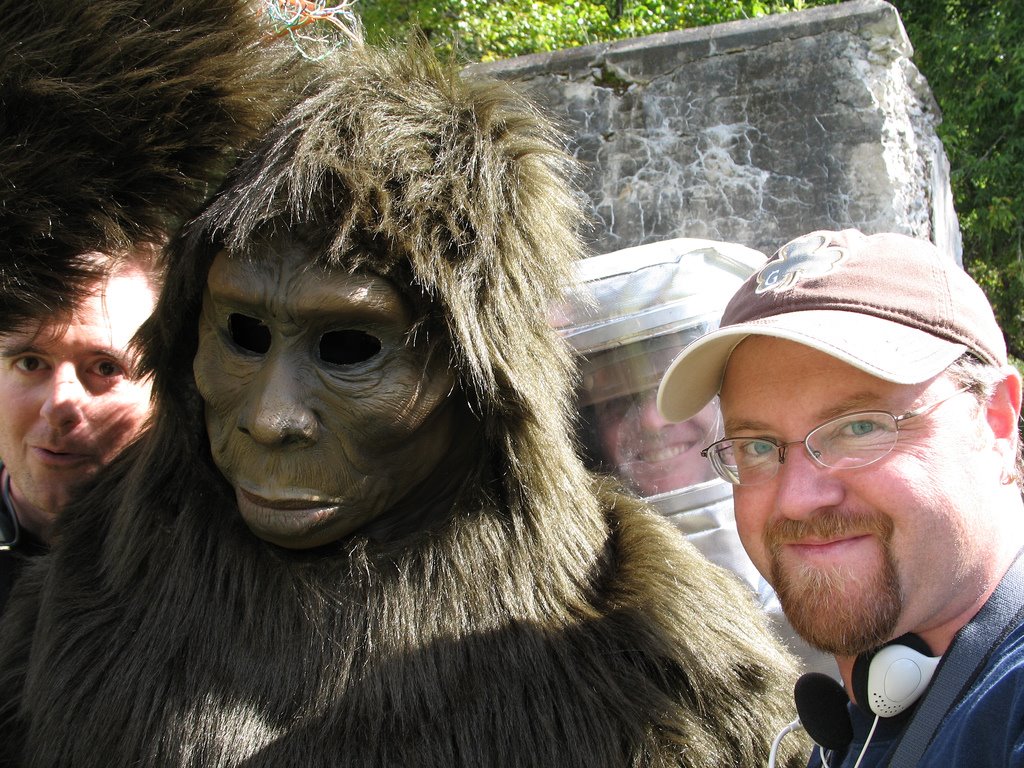 I was contacted last week by a writer for a bunch of sci-fi/horror/monster movie news websites who wanted to do a feature on the Bigfoot movies we're doing up here featuring the "geocaching" hobby. I dropped him some info and pointed him to the web portal I have with all of the material and status and he took my email and made it into a web feature.

It's kinda cool that there are people out there who troll the net for this type of thing and write about it. Even funnier is that I have had this site bookmarked for several years as it keeps track of all things Bigfoot (when it comes to movies that is!)

You can read the Monster island News article here!

For those of you who are interested, here the web portal for the two Bigfoot movies, the second one still in production, nearing completion!
Posted by Zartimus at 12:06 AM No comments: