Kinda.. Heheheh. The red splotches are supposed to be Maple leaves. Posted by Zartimus at 7:31 PM No comments:

It's funny how the pool games changed after the Kids and I watched Titanic. I thought I heard something around 11:00pm. RCA SPS 3600 - How to set the damned clock when you've lost the manual. 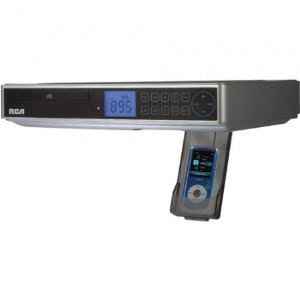 We bought one of these things last year. We needed a under-shelf mounting radio/CD/MP3 player for the kitchen and this fit the bill. The manual got eaten by wild Jackalopes and the clock has been wrong for ages since our self-induced power failure last month so I went online to look for the manual in PDF form. NADA! ZIP! RCA's web site doesn't have it. The Yahoo site that stores manuals has a broken link and I don't trust that instruct2 site that promises to send you a link to the manual after you provide them your email address and other stuff.

So I looked for the previous model (3200). Same deal. Nothing. Why every company in the world doesn't put all of it's manuals on the Internet in PDF form is beyond me. Then it was time to revisit the first option I had tried and failed at, trail and error. Push every combination of buttons on the thing alone and in series, powered on and powered off until you magically stumble upon the combination you need. In most cases they are spread apart so that even client's with ham hock fingers can do it! And after a few more minutes, here's how you set the damned clock when you've lost your manual (posted here for all the other poor consumers who need to know).

Turn the unit off by the console (display will dim but you can still see the time) and hold the MEM button for a few seconds. Display will flash and then you can change the Hour with the CD Track Reverse button and change the Minute with the CD Track Advance button (those are the controls to the right of the unit between the "+" and "-" volume buttons). Then Press the MEM button one last time to lock in the setting.

RCA sucks for not PDF'ing this manual online.
Posted by Zartimus at 10:55 AM 11 comments:

I bought a second-hand Skeeter vac a month ago. They are those magic things hooked up to propane that reek of deer breath and does a uv lightshow inside to lure biting insects to their deaths. It's not a zapper but more of a giant mosquito sucking device. The thing works like you wouldn't believe! I emptied it a week ago and I just checked the thing today and it was so full, no more Mosquitos would fit! When I popped the tray open the compacted bug bodies sprang up and went everywhere but the tray was still packed full!

I'm not sure of the range of the thing but I'm pretty sure we're doing all the neighbors a huge favour! I love those stupid lookin' shoes. They is ugly, but they shore is comfortable!

Trouble is, I wore the soles down so smooth, every step on slippery surface is a death wish. Last week I was out on my deck after the rain and I accidentally went skiing down the wet stairs in my old crocs. I managed to stop before hurtling through the 2nd floor deck posts and falling to earth and I vowed to chuck them and buy a new pair!

I had my chance a few days later on movie night. I was meeting the guys at la red stick in Kanata and there was a sports experts just across from it. I popped into the reasurant, saw one guy had arrived and grabbed a table so I told him I'd be back in 5 minutes.

I was going to pull a Jack Reacher. Buy new and leave the old ones on the floor of the store. Well, all they had were stupid leprechaun green crocs with racing stripes, not the nice brown ones I was sporting, so screw that noise! I went back to the reasturant. The guy holding our table had an interesting suggestion for me when he heard my dillema. His idea was to heat up a fork and dig it into the soles to make new thread marks (not a bad idea!).

On the way to the movie, it rained and every second paving stone in Centrum is smooth and my crocs skitter across them like I'm walking on Vaseline (stupid crocs).

Tonight I arrived home to find that my wife had bought me a pair! $4.95 at Somethingmart! They're not the same as I had but they are a lot less dangerous so the old pair is now in the poobelle. We haven't gotten the first post pool gas bill yet but so far, ye old pool heater is looking like the best investment of the summer! Floating in non sub-zero water for four nights in a row is way cool. I'm glad we came to the conclusion that we live in Canada and needed one. I try and put some thought into what I call server sharenames. They tend to hang around awhile and if you name it right, they are short, identifiable for what they are, and easy to remember.

So when it came time to come up with a name for our secondary storage NAS partition, I decided to call it SECSTOR. Say this now out loud. I did this for the first time today explaining to a female colleague that our SECSTOR was a good place to store old files because it's cheaper(the discs are not as fast).

It reminds me of the time I linked some files for an old co-worker named Arther and copied them to his home directory which he linked to with the drive letter F:

I told him I put the files in F:\ART

It comes out funny in meetings...

Don't just watch it on the History Channel. Re-enact it in the family room! Posted by Zartimus at 8:45 PM No comments:

I took out two hornet nests attached to my house over the past few days. They were little itty bitty ones with only a few dozen of the flying 'I can sting you as many times as I want' yellow jackets. What do they do anyway? Bees help pollinate and make honey. I like that, but what do Wasps and Hornets do for me?

The task went well this time. Because the nests were small, softball sized, they just took a 60 second shot of water from the hose each. If you get the hole at the bottom, the little buggers can't get out and you drown them all before the nest gets so water-logged it plops to the ground. Then you can ground spray it into Oblivion.

The only thing you have to be concerned about are the wasps who aren't home at the time of your assault, and come back to find you spraying the bejesus out of their old homestead. They tend to get pissed off about that and hopefully you're done and can run!

I made the mistake of forgetting about this a few years ago on a much larger nest at my old place and ran like a fool, aImost taking out my fence in the process. I came up with a plan involving a cinder block, duct tape, and a bungie cord. I let everything calm down, mounted a cinder block about 10 feet from the nest, aimed the hose nozzel at it and duct taped it into position on the block. Then with the water shut off the trigger was wrapped with a bungie cord but not before I tooth-picked a stick in there to keep the bungie from closing the trigger. I rigged a line to the trigger, pulled the stick out and WHAMMO! Missed the nest by a foot. I shut the water off and re-aimed. It was at this point I realized the bungie trigger was moot because I could lock the trigger open and just turn on the hose(doh! Oh well, it was fun to build!).

From the safety of my side yard, I unleashed hell (or Atlantis) on the hive of pestilence and watched as 3 of the buggers followed the hose spray right to the nozzel and landed on the back of it! Wow, they put two and two together! Smart! As it turns out, that's where the gifted program for insects ended because they didn't follow the hose to me as their little wasp pad dropped to the deck scattering larvae and dead Wasps everywhere.