When I posted the pics of what someone did to a garbage bagged busted urinal at work back on April 20th (our urinal is still busted by the way, one month later!) it went viral very quickly, appearing in a bunch of popular joke websites, all stemming from the originals I posted on my Flickr account.One day it had 3 views and the next day it had 4000. Since then it's been copied and posted around all over the place. Check it out where it's been by doing a "Darth Vader Urinal" search on Google.It's amazing how these things get around. What's even funnier is seeing all these posts by authors claiming they were responsible for it. At least some of them tagged my name on there. I wish they linked back to the original flickr photo so I could see the counts. A few days after Darth appeared in our can on the 3rd floor of the Main building, people started adding things and changing the captions. I had some pics of the Storm Trooper heads that I didn't post because they were blurry I was laughing so hard. What makes them extra funny is that they match the white porcelain urinals while Darth Vader's is black. Even Yoda was up there for awhile. I think the cleaners didn't get what was going on and took them down.

Thanks to D Dunbar for forwarding these clear shots, taken I suspect by M Savard, and speaking of the real credit, the person who actually taped the vader head and chest piece up on the wall, I think I know who it is but they are not owning up to it!
Posted by Zartimus at 12:15 AM No comments: There's a webpage for people like this. It's called http://youparklikeanasshole.com/ . Now I have never felt the need to "key" a car but if I was to suddenly start, it would be with this guy. Nothing says "I'm a presumptuous wanker" than parking like this. I don't even know what it's supposed to accomplish. Is it that the owner thinks people are morons who are going to open their car doors and give his side panel a ding? Is he saying that his car is more important than your crappy car and he is forced to park like this lest our inability to place a vehicle between two parallel lines somehow places his car in great peril? Tell you what. PARKING LIKE THIS WILL ENSURE THAT ONE DAY SOMEONE WILL %$&^#* with your ride.

I have friends (who shall remain nameless) who let the air out of tires of cars parked like this. Cheers to them I say..

The site also has this handy ticket you can leave.

Nature in the Backyard part 13 I'm counting Freddy the neighbor's cat in this batch because he scared the crap out of me the day he did this. I though he was some hairy little person trying to break into the house. I've never met his owner but I don't think the cat likes him much as he is always at our house trying to get in. Maybe it's because we feed him bacon and stuff.. (no, it's because he loves us..).. When I'm in the backyard I sometimes hear a weird SCREE sound and a large bird whips by overhead and I never get a good enough look at it. Well, this time it sat on that wooden thing the farmer has in the back yard. I'm not sure what kind of bird it is.. This was a neat one. When I was making breakfast for the kids one morning I caught a flash of orange across the creek in our backyard. Turns out it was the fox that sometimes hangs around out back. Today it was circling the wild turkeys that often waltz across the back field. I wanted to stick around to see if the fox would try for one but I had to go to work! I don't think he did, those turkeys can be mean! And the deer are back..
Posted by Zartimus at 11:13 PM No comments:

About a month ago, our six year old started to act weird. A few days later we realized she was afraid to go into the bathroom and after a few rounds of questions it came out that she had heard a scary story at her after school program. An eleven year old had been egged on by the other kids to tell a scary story so she trotted out a nasty variation on the legend of Bloody Mary. If you look it up on Wikipedia or snopes, it's hard to establish the exact history behind the story but the short version is if you go into a bathroom at midnight, light a candle and say Bloody Mary three times (you may or may not have to spin around three times before or after) Bloody Mary's ghost appears and eats your face off. Well that's enough to terrify a six year old


As I began to talk to people about it I found out that Bloody Mary is lurking in the mirrors at pretty much every school n the Ottawa area. She was even found in some kid's Jello pudding last week. Not only that but she is ingrained in the psyches of people in every age group. I grabbed the movie that came out in 2006 or 2008 and tried to watch it (It sucked pretty bad, I'm talkin' Major league II bad here...) and the funny thing was, my wife refused to watch it with me

One thing I don't understand is why my kid takes some eleven year old's word for this kind of crazy stuff but refuses to believe me when I tell her we've been living on planet earth for years and nothing's tried to rip my face off near a bathroom (well, there was that dog that one time.. and it was kind of beside the bathroom). I even tried to start a dirty rumor that bananas were about to take over the world by flying into our ears and hijacking our brains and we have to be on our guard but of course she doesn't believe ME! I'll bet if it came out the eleven year old's mouth it would be the gospel! R Gater had a great idea. He had the same thing happen to him and he got his daughter what he referred to as a "Hippy Crystal" which he told her gave protection from all mirror-based monsters. We tried it and it helped, but the fear is still there and it's real as hell and overrides common sense and parental pissed-offed-ness. 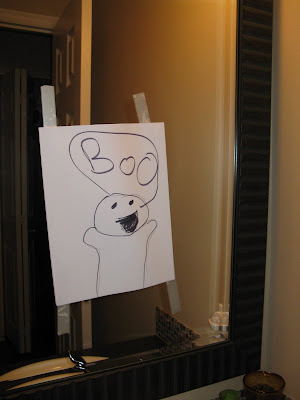 Her sister tried to help in her own way by posting a picture in the bathroom downstairs but that didn't work either. I went on youtube and found tons of videos by kids 9 to 12 (the Robinson age they call it) filming themselves saying Bloody Mary in mirrors hoping to show my daughter that nothing happens but OF COURSE half of these vids by the amateur PUNK'D crowd end with the kids slathered in ketchup and wailing when the lights come on. Thanks for nothing you jokers! I was playing L.A. Noire on the Xbox 360 last week and my character passed in front of a mirror and I got her and yelled "BLOODY MARY" at the TV and nothing happened. Not even in the digital world! So tonight when I tucked her in to sleep in her mirror-less room she buried herself under the covers once again and the thought occurred to me that she could use a snorkel to breathe.


My next step is to get some old rotting book and replace the pages inside with aged paper that depicts a medieval version of our family (our ancestors) and shows them doing battle with Evil Bloody Mary Mirror Monsters in such a way that alludes to us having built up a a family immunity..

We'll see if that cuts down on the "Oops I didn't make it to the bathroom because there's an evil witch in there waiting to rip my face off while I go pee" laundry, if you get my meaning.
Posted by Zartimus at 10:20 PM No comments: