Got together with the guys after work a few weeks ago to start filming on Trailerpark Geocachers meet Bigfoot II. We shot 3 and a half scenes. A pretty good day's work! It's always surprising how 3 minutes of video in a scene takes 2 hours to film. I use a lot of cuts for a lot of reasons (reason 1 - see George Lucas directing Jake Lloyd in Star Wars the Phantom Menace) and every one requires a small camera setup. We tried out the steadycam for the first time. Many thanks to Jim, the guest cameraman for the early afternoon shots. It looks like it might be twice as much work as the first film.

Trip and Grizz performed amiably, although we had to send Tripper out of the room for some of Grizz's scenes. He makes him laugh and wastes film(grin)!

We needed nun chucks for one scene and darned if I couldn't find my foam covered practice ones anywhere! The night before the shoot I phoned the freind who actually gave them to me for Christmas years ago to see if she still had hers (every time I'd go to her place I'd take them off the wall and fool around with them so she and my brother finally bought me my own pair) and it turned out that she was in the hospital at that moment giving birth. I asked her Mom, who was over watching the kids, if she knew where they were but no dice. I almost asked what hospital she was at(no, not really).... I waited outside Orleans Martial arts supply the next day and got an even better pair that what I had before!!!!!

We'll be shooting through September and October.. We have some Cameos this time around! My mom and the motorcycle cop. 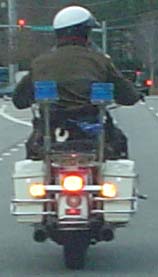 I just got back from vacation. We spent a week up at Sandbanks provincial park at the Sand Dunes in a tricked out 39 foot trailer that would have made Ricky and Julian proud! My parental units were up at the park around the same time. My mom was driving up a few days before us and she was cruising along at 140 or so and passed a nice shiny white motorcycle with some lights on posts in the back. Right after she passed it she was tired of going fast and slowed down to 110 or so.. Just then the lights on the motorcycle behind her started to flash and the motorcycle cop she had just passed was pulling her over(grin).

He seemed incredulous that she had passed him when he was doing 130. He said stuff like:
"Wasn't I going fast enough for ya?"
"Are you mocking me?" etc.

Of course my mom didn't get a ticket. She never gets tickets. She starts to cry and the cop starts to feel bad and lets her off with a warning to slow it down.

I'm going to cry the next time I get pulled over and see if it works for me too!
Posted by Zartimus at 10:11 AM No comments: I went sailing a couple of weeks ago. It was a blast! The last time I'd been on a sailing boat was back in the 8th grade at Camp Arawon. This one was a nice 28 footer, and we did a race. Came in 7th or 8th outta of 30 some boats. I went with Paul in my french class (it's his boat).
It was a pretty busy time to tell the truth. There's aways something to crank, or tie down, or pull, or get out of the way. I was the "Deck Monkey" and did the "Skirting" which means to pull the front sail flush with the side of the boat so it catches the wind just right. That sail is called the ginny or something like that. When you tack or jive the main sail boom goes swinging around the back and that front sail changes sides(taking anything in front of it - like you - with it) and you have to pull it down tight other wise it flutters and you don't go as fast as you should. When it's sailing right the boat is on like a 45 degree angle which is pretty wild. I meant to track the speed with my GPS but I never had the time. They decided to change sails mid-race and when one of the guys was trying to stuff it down the locked forward hatch I went down in the galley to unlock it. It was like the crazy kitchen down there because the boat was on a 45 degree tilt. I walked along the floor and wall like spiderman and noticed that the starboard port holes were kind of underwater. Very weird... I'll definitely go again if they need people. It was a blast!

I blew out one of my Crocs though. (exchanged them the next day). Something about shifting ones weight so as not to fall overboard and the one shoe just couldn't take it. In fact, it is so easy to fall overboard when you skirt it's funny! You change direction, you stay out of the way of the swinging boom and the whipping front sail and soon the boat is tilting 45 degrees on the opposite side so the deck is on a 45 when you scramble down to skirt the front sail and you then have to scramble back up high on the opposite side of the mast where it;s safe and nothing can really plow you overboard.

Lots of fun though!
Posted by Zartimus at 12:15 AM No comments: Had my french comprehension test today. It went very well, 56/65 - good for a C which is what I need. Heck, I missed the E by 3 points. The "E"(exempt) means they'll never have to test you again in your life. Heck I may take it again just for that. The bad thing is your last mark always counts so if you screw up and get a B, you'll be back to do it again..

When I get that maybe I'll start blogging in french! Muhahahahahaha!
Posted by Zartimus at 12:09 AM 1 comment:

A nice Bigfoot for the garden

I love adsense sometimes. It reads my google emails and gives me meaningful links at the right to click on.. I clicked on one today and got this. I want one.. no..

Who doesn't need a Bigfoot for the garden!
Posted by Zartimus at 11:20 PM No comments:

I visit a lot of weird websites (for reasons that I will not go into) that have weird forums with weird people and one thing that is common across all these very different places is that everyone has to have a cool avatar. You know, an avatar, the cool graphic that represents your person on all these digital forums. Every time I see a cool one, I copy it and from time to time blog them. My favorite ones are the animated GIFs that play like a little thumbnail video.

It's pretty funny to see a comment posted by someone who has two geeky little kids dumb-dancing underneath his name.

Here's a small selection (personally, I like the buttcrack kitty-sniper). This morning I saw my semi-new neighbors (that I have not met yet) working on their lawn. Four hours later I took this picture. I looked a little while ago and they appear to have stopped.

What are they doing? It seems to take a long long time, like 4 or 5 hours. Are they cutting the grass with nail clippers? I don't think so because I've seen the guy cutting it with one of those neat manual push-mowers.

I like the little step seats though. I have one that my kid uses to get up on the toilet. Now I know I can also garden with it!
Posted by Zartimus at 4:25 PM No comments: Ever wonder why some restrooms at public facilities like movie theaters and restaurants don't have paper towels sometimes? They'll typically use air-dryers and no paper towels at all. One reason may be the odd appearance of the poop crayon from time to time.

Everyone had forgotten why there were no paper towels in the first place, but this question was soon answered the night some patron voided his bowels in the rest room (this typically occurs in the Men's room) and wasn't satisfied to leave it at that. This person(or persons) got some new paper towels ("Hey, they didn't have these before!"), fished Mr Poopy from the toilet bowel, swaddled it in paper towels and proceeded to paint a big poopy picture on the restroom wall.

Having worked at a theater as a teenager, I have no idea what I would have done if I had walked in during a restroom check and found some stupid ass kid painting on the wall with his own fecal matter (I'm assuming it was his own).

There.. so now you know!
Posted by Zartimus at 4:00 PM No comments:

For the last few nights, I've been hearing a damned beep in my computer room every hour on the hour. I think it's the Suntro watch I broke and then misplaced (so much for unbreakable watches). It was the black one with the compass and barometric pressure analyzer. It was a cool watch. It was so big people would always ohh and ahh over it, like it was some big freakin diamond ring or something.

I sounds like it has miraculously repaired itself and I'm trying to look for it but I have to be in the vicinity for the chime and so far I've missed it every time.

It's probably still screwed up as I've changed the battery twice and it still acts up. I need a new watch. The cheap-ass one I bought as a stop-gap actually has hands that move and it ticks and keeps me up at night. With this stupid watch I have spidey hearing and it drives me nutzo. I want cold digital silence!

Anyone have any suggestions?
Posted by Zartimus at 12:00 AM 3 comments: A few weeks ago I went to the Canadian Guitar festival in Kingston. I've been there two years in a row now to help film it which is always a blast. There are times I wish I got into broadcasting as a profession, but heck, I picked computers and things have a way of working out. I got to see some old friends I'm a fan of, and some new artists I've never heard of, but was totally impressed by. You can check the line-up out on the website. Brooke Miller was there playing cuts from her fantastic new CD (Yeah, I know I take too many pics of Brooke, but the camera loves her and she puts some up on her website and it makes me feel like a Rolling Stones photographer!). Andy Mckee was there (I'll be seeing him again in September in Cannington, and they're all booked for a Canada tour with Don Ross sometime in October). Del moved it from the Odessa fairgrounds this year to a new campground he recently purchased, so it's kinda like Trailerpark Boys do Winfield(grin) - but with style!. They had some new guitar makers out this year and I'm reminded that I picked a luthier (Tony Karol)out at the last guitar festival to make me up a custom geeeee-tar! It should be done in December of this year! If you've never checked out this fabulous festival, check it out next year!
Posted by Zartimus at 1:38 AM 1 comment: