Using the Guitar for evil! 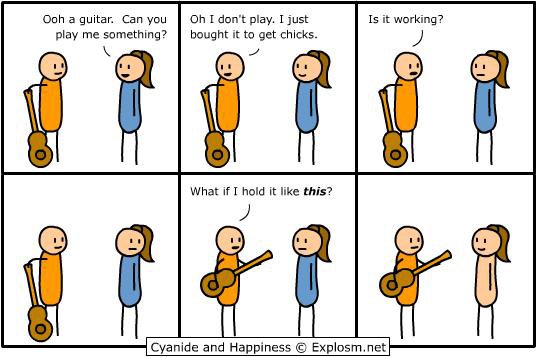 Funny because in a small number of cases, it's TRUE! When I was a youngster, a friend of mine was interested in learning the guitar and I had a longstanding offer to show anyone and everyone I knew how to play the wonderful things, so I started him out with the basics. Well, he met this girl shortly afterward who noticed the guitar standing in the corner at his place and she indicated strongly that she really liked the sound of an acoustic guitar. I was over a few days later and asked him how the guitar was going and he asked me if I knew how to play "More than words" by Extreme. As it turned out, GPFTPM had ran a transcription of it a few month back (this was in 1990) and I had learned it. I still remember taking the performance notes to heart. the first sentence was "Throw your pick down.. NOW! You have 10 seconds to comply!". Hehehehehe. (I still feel that way about most acoustic pieces).

So I ran through the intro and he goes "Hold that thought!" and phones up his girlfriend. She answers the phone at her place and my friend goes "Hey, check out this song I just learned.."and points the phone at me while I still have the guitar. So I get what he's trying to do and I flubbed the first few notes as a joke and he pulls the phone away and says to her "Just a sec, I'm not comfortable, let me sit down to play this." and he gives me a look and points the phone at me again.

This is going to be really funny, I thought, so I launch into Nuno Bettencourt's acoustic pop masterpiece full force embellishing all the arpeggios and full face guitar-slaps, bla bla and after about 15 seconds I can hear this girl screaming on the phone and my friend has this huge smile on his face. He starts talking to her so I stop because it's not easy to hold a conversation and play right? And she is telling him that she is coming over NOW! I wave at my friend and point at the guitar and make strumming motions and he gets the hint and says "Wait, wait, I got another one!" at which point I played the intro/chorus and verse to "Hole Hearted" (that month's GPFTPM had it). This time the scream on the phone was louder. I like girls that have an appreciation for the instrument!

I left at that point, and I don't know how long he was able to keep his non guitar prowess a secret, but that was the last time I did that.Definitely using the guitar for evil there!
Posted by Zartimus at 9:42 AM

Much more difficult, but 'way more satisfying using a banjo instead of a guitar... ;-) model12