My creepy picture from the 1800's that freaks out the cleaning staff... 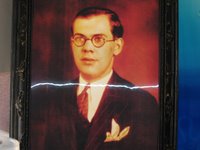 I found out Friday afternoon that the cleaning staff where I work are superstitious and terrified of my office on the 7th floor all because of a weird picture I have on display there. I got it for Christmas (from my mother) and I really like it. It's a sepia picture from the late 1800's featuring a weird-looking gentleman with spectacles that I'll admit is pretty creepy. In fact, the reason I have it at work is because one of my kids is terrified of it and I had to get it out of the house. I tell people it's my great grandfather (grin).

The thing that is special about it is that it's actually a hologram. As you look at it from different angles, the guy with the specs turns into this winged skeleton full of decaying flesh (I really like it! it was the perfect Xmas gift!)

So I was at work late Friday afternoon, re-organizing some new shelving and tossing out some old junk when the cleaning lady came by to empty my trash can. I come in after hours sometimes and often have to sign in and I've spotted the cleaners list at the guard station before. I've noticed most of the cleaner's last names are the same so I figure it is a family operation of some sort. The names look Spanish or Portuguese.

Since she could not get in my office, I reached over and emptied my trash into her bin and that's when I noticed she was staring at the picture of the creepy guy on my wall. I turn around and look at it then I turn back and tell her.
"It's my great grandfather.." She was horrified. Then she said in broken english:

And this is when the guy that cleans the bathrooms also came by and nodded vigorously(there is a handicapped washroom two offices over from mine).

And they hurried off, glancing behind a few times

I find this HILARIOUS! You know... There's been different cleaning staff up on the floor lately and I wonder of they are drawing straws or something. Usually it's the same people every day. What makes this especially funny is that they are just freaked out by the picture of the old guy. They haven't seen what he really looks like underneath because of the way I've positioned the frame. I've already notice this with my co-workers who will sometimes come in and stare at the picture. You only see it change of you come in my office and move about 5 feet to either side, so most who see it don't know it's a hologram. 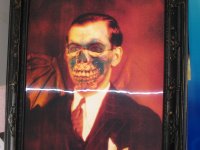 To make things fun now I'm going to adjust the angle of the picture just a little bit over time. About 2 inches a day, for the next week. As you change the angle , just a little bit of the creepy thing starts to show through. Like, right now I moved him two inches and you can just see an outline of bony wings in back of the guy, he still looks pretty normal though. I'll do this a few onches a day and by Friday it will be showing the winged skeleton full of rotting flesh! 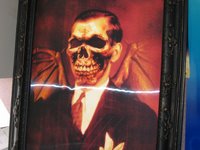